A Slave Tracker not having sensor feedback like a Master may consistently run ahead or behind the Master. This could be due to slight differences in the motors, gearing lubrication, mechanical wear on the tracking system.

If the variance is not consistent then there could be motor, gears or slew problems and this procedure should not be used.

If the Slave Tracker is behind the Master (Azimuth)

To obtain maximum accuracy and kW production, the Slave should be calibrated to align with the Master  at solar noon. If the Slave is behind the Master and hasn’t reached 180 degrees (in the Northern Hemisphere) then the Minimum Limit Switch should be adjusted so that the starting position in the morning is ahead by the same amount so that the positions of the Master & Slave converge at noon.

If the Slave Tracker is ahead of the Master (Azimuth)

Conversely if the variance of the Slave has reached more than180 degrees then the Minimum Limit Switch should be adjusted so that the starting position in the morning is behind by the same amount.

It is possible to achieve the same results by adjusting the Master Limit Switch in the opposite direction but this will throw off the Minimum Limit Switch calibration so will need a correction (see correction)The Slave adjustment is preferred.

This procedure is the same except the Stow position should be 45 degrees. 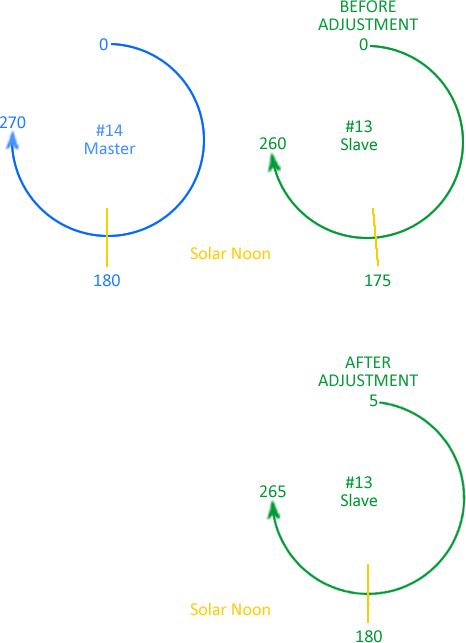